Posted on November 17, 2012 by mooneystudiodiary

October 2011, inspired by finding two Edwardian plaster cast models of ham in a flea market and some old cream and pink wool blankets, I began to work on the idea of creating ‘meat’  from patch-working fabric together. 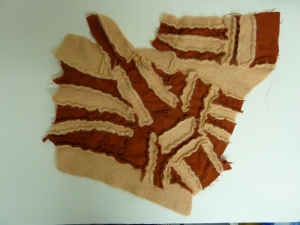 The desire to work with fabric again was very strong, I think as a direct result of denying myself the comfort of a familiar material and methodology.

I am convinced I have been moving closer to portraying my interest in the visceral, something difficult to confront, but at the same time strongly compelling.

Another of my interests also has begun to emerge concerning the cultural horror of the corpse; even whilst being continually surrounded in daily life by animal and human body parts, we are absurdly de-sensitized to their reality.

I decided to use a method of moulding with PVA and fabric that I had experimented with on the first year of the programme but had abandoned because I was uncomfortable with the lack of control I had over the outcome. I think it is with greater maturity, experience and confidence that I re-appropriated this method, being less concerned with the perfection of the finished artefact and more trusting in intuition, giving space for the subconscious and the unknown to emerge.

This whole piece was only partially planned,  the piece arrived in front of me fully formed and an almost total surprise. 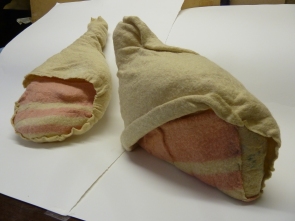 The ‘meat’ that I was trying to create has become the main body of material for the ‘Hanging Hams’ (2012) where I used more wool blankets to also create human leg ‘ham’ shapes.

Gallery | This entry was posted in Uncategorized. Bookmark the permalink.